In the 1950s my mother and I traveled by bus and train to the States to stay with her parents each summer.

A few months later my father arrived in Lake Andes, South Dakota to drive us back to our home in Canada.

On one of our last excursions we attended a passion play in Spearfish, South Dakota and it was rumored that the last six actors who played Judas commited suicide in real life. Dad said he doubted that.

We checked out the Grand Canyon and took the detour to Mt. Rushmore.

We explored Jewel Cave, currently the third longest cave in the world, with 200 miles of passageways.

The guide claimed that dozens of tourists had wondered from the main group and perished. Dad said he doubted that.

We drove to The Reptile Gardens that featured a thousand snakes of every variety in what appeared to be a shallow swimming pool.

One of the attendants tried to impress a girl by waving his hand in front of a Diamond Back and then grabbing the critter in mid-air as it struck.

The snake won the third round much to my father’s delight.

Another snake wrangler produced a glistening pocket knife and sliced an X over the bite, then sucked out blood and venom.

When we were we leaving the guy who had sliced up his colleague said that fellow was just showing off. “So I let him know I had a knife. I don’t think he’ll try to show off again.”

“Impressive and quick thinking,” said Dad. “You certainly taught him a fine lesson.”

“The thing, is Sir, because of the danger of our work, we can’t get insurance. Donations for medical expenses are always appreciated.”

My Dad, biting back laugher, wished him good luck and asked how many times a day the pair put the same show on.

As we headed for our car my father said he had been to the reptile place and witnessed the same stunt. “I was watching for it this time. That rattler probably had no venom glands and the guy with the jack knife had his mouth full of ketchup.”

We liberated fresh corn from the susurrus of seven foot stalks and we ate the succulent kernels, savoring the milky juice that burst from them. Dad said no farmer would begrudge or miss a few ears of corn from the bounty of the Lord.

Mother waited in the car while Dad and I fetched the corn from the Lord’s bounty. Mother felt Dad was setting a bad example for their only child.

Dad always found curious travel routes for us  — said part of the fun was getting lost ….

There were no gates or flashing lights.  Just round signs — easy to miss. Dad said trains had the right of way and they could prove it. You had to watch for ’em.

When checking for approaching trains Dad parked our Oldsmobile Rocket-98 on the railway tracks — much to the horror of my mother.

Dad explained one could get a clearer view of approaching trains if one straddled the tracks since such a vantage point provided unobstructed views.

Having parked on the tracks Dad, switched off our engine so we could hear trains approaching.

I prayed we would not hear the whistle of any oncoming train or anything else that sounded close to it.

On occasions a train could be seen in the distance but Dad always got our Olds restarted before some great steam engine thundered over the rails where we had  parked seconds earlier.

When I turned 16, my parents let me drive.  Fun for me but I noticed that neither Mother nor Dad slept while I was at the wheel.

On a lovely fall day, with a cinnamon sun low in the west, we came to a railway crossing. I parked on the tracks to look both ways.  I turned off the engine as dear old Dad had taught me.

A million pounds of coal-guzzling steel — roared out of the sunlight.  A one-eyed tiger bearing down on three frozen rabbits. 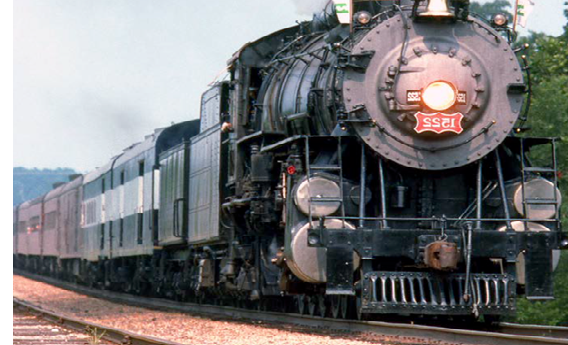 I tried the ignition but the car didn’t seem to start.

Mother and Dad scrambled to safety.

I remained in the car, trying to start it, fumbling with the ignition.

The engineer rode his whistle: Two long blasts; a short, and a long.  The universal code that something that could level mountains would blast through the crossing.

Mom and Dad raced back to get me.

That iron monster ground toward us with frightening intensity. Sparks flew from the train’s steel wheels as they locked on the tracks. The sound was so shrill I could not hear what my mother and father were screaming.

My father yanked on my door. It held. Mother handed Dad a rock to break the glass.

It seemed the engineer braced himself for impact. I imagined I could see the terror in his face.

Dad was about to smash my window to save his only child; his only child smiled and started the Olds and rocketed out of harm’s way.

Dad and Mom jumped to safety.

The earth heaved as dozens of boxcars flashed by.  You could feel the ground tremble.

Silence. And, then the distant train whistle, fading and changing pitch inder the ice blue sky.

We were safe. Mother hugged me and wept.

My Old Man really loves me despite the many beatings he administered; he was willing to die for me. Wow, I thought.

“You little bastard, stop smirking,” Dad said. “You pretended it wouldn’t start. Fathead!”  He slid behind the wheel. I sensed that would be the end of my driving on this trip.

I thought he was going to slug me but he didn’t.

Nor did he ever stop on railway tracks again to see what might be coming.

Dad regaled our relatives for many Thanksgivings with our close encounter with an Iron Horse and vowed I would never be allowed to drive until I was 40; Mother would smile and later that night sneak a slug of port to quench her memories of the time she almost lost me to a speeding train.

That last time I was helping with the dishes I asked her why Dad acted bizarre every time he picked us up at the end of the summer.

“He hated that long drive to South Dakota every year. And, he didn’t enjoy my parents much.”

I miss my road trips with Mom and Dad … trips that started so innocently.

Click one of the above to see some of my work.

You can buy one of my novels here. If you

can't afford it, write me a funny

note and I'll send you a PDF

Rather than beg one million people to donate a dollar each, I'd like one billionaire (or two or even three) to simply give me a million buck$. You know who you are.